khattak Dance is a popular dance of the Pashtun Tribe in Pakistan has withstood the change of times over centuries. Its flavor and essence are almost in its original form that depicts the agility of a dancer that comes from the very heart of the dancer.

Often performed on occasions such as weddings and birth of a baby, men dress in bright and colourful traditional shalwars and specially tailored frock-like kamiz in addition to red embroidered waistcote with large decorative scarves tied around the waist, wave glittering swords in the air and swirl to the drumbeats and tunes of surnai.

A Khattak dancer performs with the zeal of a hero, displaying his physical fitness through body movements, while holding one, two or even three swords at a time. The dance is a 5-step routine involving spins, with the swords crossed over their backs and elbows outward, or it can be performed with the swords out to the sides and typically attain half spin in place leading to a full spin. Depending on the rhythm of the beat, this spin can be completely reversed in full synchronicity. This dance is performed with the musician tuning the beat to the technique of the performers. 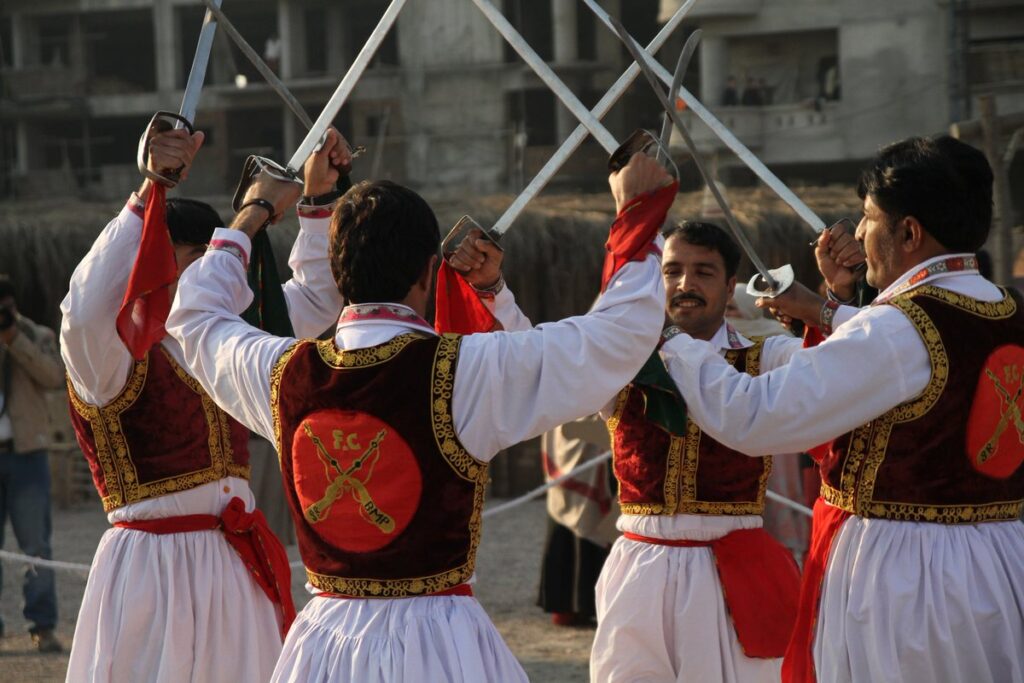 The first step is the Bhangrah where every member swirls while carrying swords as the prop. The Bhangrah is followed by Derabi. At this stage, two youths at a time, carrying one sword and a handkerchief each in their hands, start dancing in front of the man with surnai while the rest of the troupe members wait for their turn. In the Laila, the third step, a group of four performers holding two swords each, perform stunts moving in a circle.

Braghoni is the fastest and the most adventurous of all steps, which a single dancer performs with three swords. He very skillfully swings two swords in the air while holding the third in his mouth. Bulbullah, the last of the twelve steps, is staged without swords. The dancers sing a love song at a high pitch. At the end of the song, the drumbeat increases slightly and the dance goes on.

The Khattak dance is as old as the history of the tribe, going back to the fourteenth century. As the word goes, the Khattaks used to dance with swords as a warm-up exercise prior to taking on their rival tribes in a battlefield. With the passage of time, dance became a permanent feature of their funfairs, giving the tribe an additional emblem of their distinct identity.

This is inserted at the bottom